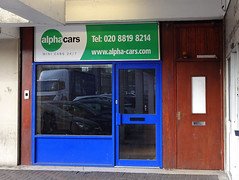 Some time in 2016 or early 2017 the sign changed to read Alpha Cars, but as of March 2017 it wasn't clear whether this was actually open. As of April 2017 there was a pile of mail inside the door and nobody obviously inside. In December 2019, a member of staff at Skunk House (the smoking shop next door at number 213) told us that the cab office had been closed for a couple of years at that point.