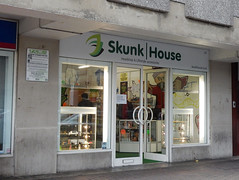 Head shop and "lifestyle accessories" shop on the High Street. It opened in September 2015. It sells scales, incense, rolling papers, and so on.

It was previously an employment agency called Jark photo, but this closed some time between July 2012 and February 2013. As of February 2013 it was cleared out and vacant, and it was still vacant as of August 2014.