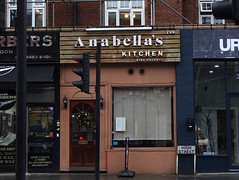 Business premises on the High Street. It's quite small, seating only about 25 people when used as a restaurant.

By July 2012 it was an Argentine restaurant called Buenos Aires photo; this closed some time between February 2013 and March 2014 photo from April 2014.

As of late June 2014 there was a notice in the window photo stating that a "New Cafe/Bistro" would be opening there soon. A Mediterranean restaurant called Anabella's Kitchen (see archived website) opened some time between then and early August 2014. This was still there in December 2019.