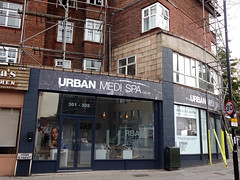 Beauty salon on the corner of Coombe Road and the High Street.

It was previously a hair, beauty, and tanning salon called Body Beautiful photo.

As of July 2012 there was also signage on the front for London Lettings photo, and this was still the case as of February 2013. Some time between then and April 2014, signs for a payday loan place called Pera Loans appeared photo; according to an email from Pera Loans, entry to this was via Body Beautiful. By December 2015 the Pera Loans signage had gone photo and the place seemed to have closed (though Body Beautiful remained in place).

Some time around late 2016/early 2017 Body Beautiful moved to where a sign in the window described as "opposite Tesco". We wondered if this meant number 208, which at the time was being converted to a beauty salon, but according to a member of staff there in March 2017 they were nothing to do with Body Beautiful.

As of August 2019 it was being fitted out to open as a beauty salon called Urban Medi Spa photo. This still wasn't open as of mid-September, but had a sign saying that it was opening soon photo. By late October there were staff inside and the premises were open to the public, an 8 November post on their Instagram stated that they were "now open", and other Instagram posts showed completed manicures done at the salon. However, according to an email from another member of staff (February 2020), they hadn't "completely opened" at this point due to "unplanned building work" on the floors above.