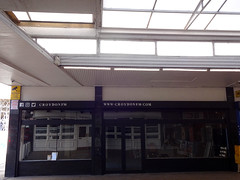 As of July 2012, numbers 29 and 31 St George's Walk were occupied by a discount shop known as either Discount People or G-Pound Zone Store or possibly both photo. This closed down some time between May and November 2016.

As of November 2016 there was significant building work going on inside. By March or April 2017, numbers 29 and 31 had been separated, and number 29 had become Orbis Outlet photo.

By October 2017 Orbis Outlet had moved into number 31 and number 29 was vacant photo but under refurbishment photo to become the headquarters of an internet radio station known as Croydon FM.

Croydon FM was definitely up and running by March 2019, and was still operating at the end of the year. According to an EastLondonLines article, it used its St George's Walk premises to record live shows.