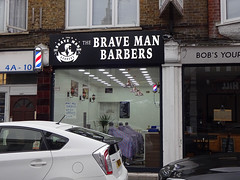 Business premises on Selsdon Road in South Croydon. As of the end of 2019 it's being refurbished to open as Brave Man Barbers — when we popped in on 31 December it was almost but not quite ready to open.

By August 2012 it was a hairdressers called Hip Top Hair Studio photo, but this closed down some time between March 2017 and February 2018. As of February 2018 the interior was stripped out aside from a few bits of furniture photo. Still vacant as of February 2019 photo.

A clothes shop called Randoms photo opened around the start of March 2019, but as of September 2019 there was a notice in the window photo saying that this had moved somewhere else.

The premises were vacant as of December 2019 photo, but with a notice photo stating that a barber shop called Brave Man Barbers would be opening on 23 December. This seems to have been an over-optimistic estimate, since when we popped in on 31 December it was almost but not quite ready to open.