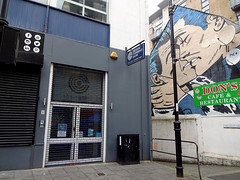 By August 2012, the upper floors of 5-9 Surrey Street were occupied by the Croydon Conference Centre, a bookable venue that catered for daytime meetings as well as evening events. According to posts on their Facebook page, this was still active in December 2019.

For a while, part of the venue was home to Relief Creche Care, which provided short-term care for children while their parents/carers visited the shops or other facilities in central Croydon. This opened in August 2012, but by early 2015 had changed to providing a mobile service only, with no permanent premises.