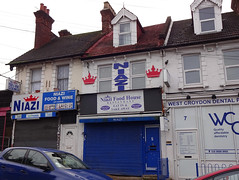 As of December 2019 it's been vacant for over three years, though there has been sporadic action throughout this time including on-and-off building work, a notice in the window dated May 2017 photo stating that an application had been made for a premises licence for late night refreshment and supply of alcohol, a sign that appeared in July 2017 claiming it would be opening soon as a restaurant called Niazi Food House photo, the appearance of decorative cut-outs on the upper floors, and work in late 2019 involving either the removal or the installation of some sort of kitchen equipment.

It was previously an Indian and Bangladeshi restaurant called Depa Indiana photo, but this closed down by early October 2016. According to a member of staff at Niazi Food And Wine next door at number 3 (November 2016), it was likely to become a chicken and/or pizza shop, as the owners had had difficulties recruiting Indian/Bangladeshi chefs.

According to the Croydon Advertiser, this was the site of the first curry house to open in Croydon, in 1958. Historical phone books give some support for this, as a restaurant called The Curry House is listed here from the 1961 Outer London: Kent/Surrey edition to the 1984 Caterham & Reigate edition inclusive.

According to a photo on Flickr, it's been called Depa Indiana since at least c. 1985 (most easily visible at original size). However, it's had at least two different sets of people running it under this name. A change of management some time around 2011-2012 saw the food become halal and alcohol banned from the premises photo of sign in September 2012.