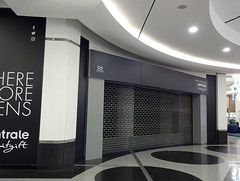 It was previously a homewares and furniture shop called Our House Retail, which opened some time between April and November 2017 but closed down again by January 2019.