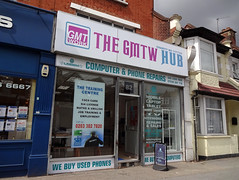 As of July 2012 the sign on the frontage read "The Concept House photo, though we never saw this open so it might already have closed down by that point.

By July 2013 the premises were definitely vacant, and had a "to let" sign. Signage for a tanning salon called Tanworld was up by October 2013, and it opened some time between then and March 2014 photo.

By April 2015 Tanworld had gone and there was signage up for an organisation called Get Me To Work photo. This was open by December 2015 photo, operating as a social enterprise company focused on coaching and mentoring unemployed people to help them back into work.

Some time between March 2017 and February 2019 the sign vanished and a poster for "The Training Centre" appeared in the window photo, and by May 2019 it had also acquired signage reading "GMTW Hub". The owner told us in May 2019 that it was still the same business as when it was called Get Me To Work, but that computer/mobile/electronic device repairs were now available on the premises as well.

The repair business was called LIM-GSM, and according to an email (Aug 2021) from its owner, it operated as a separate business from GMTW, and was just renting part of the space in order to avoid the cost of having its own shop unit.

Both businesses were still in place as of December 2019.