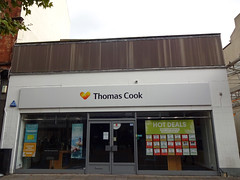 By December 2011, 96-98 North End was a branch of Thomas Cook travel agents photo. This closed down photo of notice along with the rest of the chain when the company collapsed in September 2019.

In October 2019, BBC News reported that all of the Thomas Cook shops would be bought by another firm of travel agents, Hays Travel. By December 2019, the Croydon branch was back open under the management of Hays Travel; it didn't have a new frontage sign yet, but according to a member of staff they were hoping to have one up by the end of the year.

Note that its neighbour to the south is not 94 North End, but 92 North End; this is probably because 94 North End was demolished at some point in the latter half of the 20th century, with the space now forming an entrance to the Whitgift Centre. Prior to this, 94 North End was a cinema called the Eros Cinema (previously the Empire Theatre); see Cinema Treasures entry and postcard view from c. 1959.