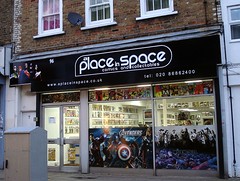 By December 2011 it was occupied by a domestic appliances shop called Gas Homes photo, but "closing down" signs appeared during August 2012 photo and according to the Croydon Advertiser (webpage now deleted) it closed for good on 25 August.

By mid-December 2012, it was taken over by comics shop A Place In Space, which had previously operated from the shop across the road at number 101 (though they didn't put their sign up immediately photo). By October 2013 they had closed number 101 to the public in order to use the space for internet-order stock, leaving number 96 as their only public shopfront. This remained the case as of December 2019.