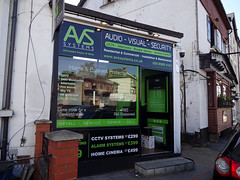 Audiovisual and security specialists on Selsdon Road in South Croydon.

It was previously occupied by a minicab firm called 1-2 Cars photo, but this moved to 98 Windmill Road, CR0 2XQ some time between November 2014 and October 2017. The premises were vacant as of October 2017 photo.
Existence last checked in December 2019.
Selsdon Road