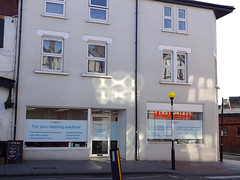 Although there are staff on the premises, it's primarily used as an office and is not generally open to the public.

The premises were vacant as of July 2015 and still vacant as of December 2015 and February 2016 photo. As of September 2016, it looked like there was something happening inside, but it wasn't clear what what. By March 2017 there was signage for a commercial cleaning and caretaking firm called Rochelle Ltd.