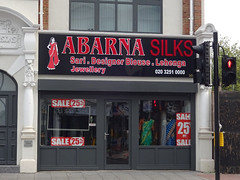 Clothes shop and jewellers on London Road. It opened some time between May and September 2017, in a new building constructed to replace the part of Royal Parade that was burned down in August 2011.

By August 2019 it had also added a couple of hair and beauty chairs; this function had previously been performed in the owner's other shop next door at number 270.