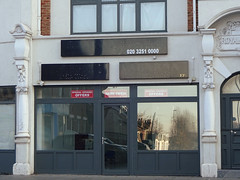 It was previously a beauty salon, manicurist, and hairdresser called Abarna Beauty World photo, which opened some time between May and September 2017. This closed down again some time between June 2018 and August 2019, with operations moving to a couple of chairs in the owner's sari shop next door at number 268.