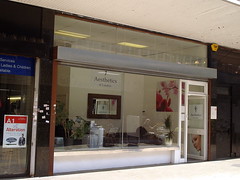 It was previously a beauty treatment centre called Aesthetics of London, but this closed down some time between October 2017 and October 2018.

The premises were previously occupied by a different beauty treatment center called Depicool photo, but by September 2013 this was open by appointment only photo of sign and by July 2014 it had been replaced by Aesthetics of London photo.
St George's Walk