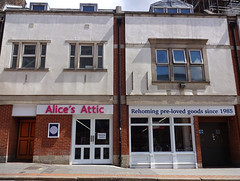 Charity shop on the High Street. It opened in August or September 2017.

The premises were previously part of Manhattan bar, but after the bar closed around 2007 it remained vacant until Alice's Attice moved in ten years later. (The rest of the Manhattan premises became a branch of Sainsbury's in 2012.)
Existence last checked in December 2019.
High Street ...