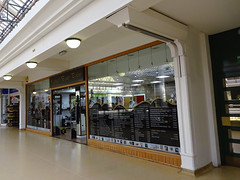 Beauty salon on the upper level of the Whitgift Centre. It opened some time between July 2014 and June 2015. In Summer 2017 it opened another branch at 4 Suffolk House, George Street.

It was vacant as of September 2013 photo, but as of July 2014 signage had appeared in the windows photo stating that it would be opening soon as a beauty salon called Angel Beauty Parlour.