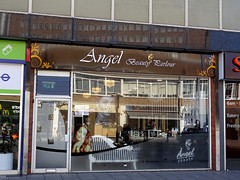 Beauty salon on George Street near East Croydon Station. It opened some time between June and August 2017 as a new branch of an already-established business at 1021-1022 Whitgift Centre.

By July 2012 it was a "rolled sandwiches" and pizza shop called Doughmasters photo, which advertised its sandwiches as all being made with freshly baked flatbread. They did takeaway and eat-in, with seating for 22 people at tables for 2-6 people. Plates and cups were disposable, even for eat-in, and there was a bin for you to clear your own table. Doughmasters closed down in June 2016 photo of notice.

It was still vacant as of June 2017 photo, but with a sign in the window stating that it would be opening soon as Angel Beauty Parlour, which already had other premises in the Whitgift Centre.