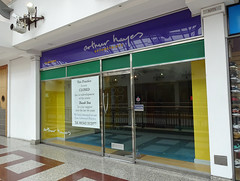 It was previously occupied by an opticians called Arthur Hayes Optometrists photo, but this closed down some time between June 2015 and January 2016; according to a sign in the window, this was due to the impending redevelopment of the centre, and their East Grinstead practice remains open.