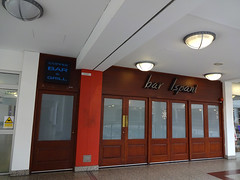 It was previously occupied by a cafe called Bar Ispani photo, but this closed "for refurbishment" some time between June 2013 and September 2013, and never reopened.

Bar Ispani was open by July 2012. As of September 2013, it was temporarily closed for refurbishment. As of early December 2013 it was still closed, with a sign in the window stating "closed for 2 weeks while we decorate".