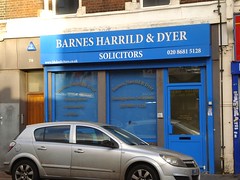 The premises were badly damaged in the August 2011 riots, and as of January 2012 were boarded up photo with a notice advising customers that "due to the riots our staff have been temporarily relocated". The boards had disappeared by August 2012, and Barnes Harrild & Dyer were back in operation by November 2012.
Existence last checked in December 2019.
London Road ...