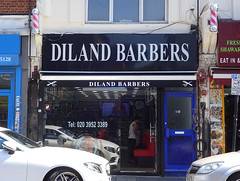 Barbers on London Road. It opened some time between March 2017 and June 2018.

See The Past and Present of Croydon's London Road for history up to July 2015, at which point it was a cafe and coffee shop called Finjan.

As of September 2015, Finjan was temporarily closed for refurbishment, according to notices in the window. It remained closed as of early November. By late November there was a sign in the window photo recruiting "Hairdressers, Barbers[,] Stylists, Makeup artists, Nail technicians, Threading", and the interior had been filled with hairdressing stations photo taken through window. This opened as a hair/nail salon called Lava in January 2016 photo.

Some time between March 2017 and June 2018, Lava was replaced by Diland Barbers photo.