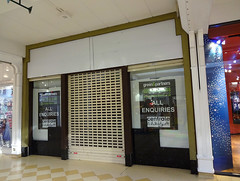 It was previously a clothes shop called Bird Cage photo, which opened in mid-2014, but this closed down again some time between October and December 2019.

This unit was vacant as of June 2013 photo, having previously been occupied by Goldsmiths jewellers.

A clothes shop called Nottinghill (or Notting Hill) photo opened some time between then and September 2013, and had closed again by July 2014 photo. (Nottinghill had a previous branch in Unit 123, but this had closed by May 2013.)