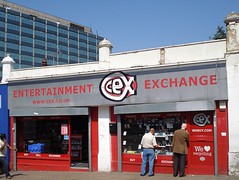 CeX was a second-hand video games/DVD/electronics shop on George Street, next to East Croydon Station. It closed in May 2015 photo, along with its neighbour, the Croydon Visitor Centre. However, its other branch at 43 George Street remained open.

By January 2016, the building had been demolished photo.