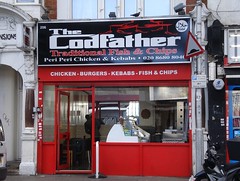 Burger/kebab/fish-and-chip/pizza shop on London Road. They have four or five seats for eat-in. According to the frontage as of January 2014, the food is halal.