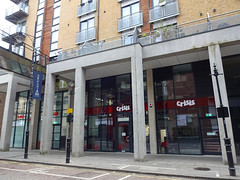 Following the closure of the Surrey Streatery, the space remained empty for nearly two years. However, in February 2016, the charity Crisis were granted planning permission (ref 15/05640/P) to open "a day centre [...] for homeless people" in the space, and this finally opened in February 2017.