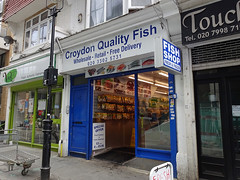 Fishmonger on Surrey Street. It opened in late February or early March 2015.

This is the second branch of Fresh Fish of Croydon and Surrey at 25 Church Street. It was previously called Sea Food Supermarket and located at 62 High Street.

By February 2015 it had been split back into two single units, and number 21 was due to open as Croydon Quality Fish, previously Sea Food Supermarket at 62 High Street.