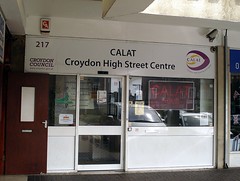 Still vacant as of May 2019, but with signs up stating that it's being used or was being used as a site entrance by construction company Bouyges UK (the principal contractor on the Leon House development).

It was previously occupied by Croydon Adult Learning And Training (CALAT), but this moved to the Clocktower on Katharine Street in August 2013 photo of sign.