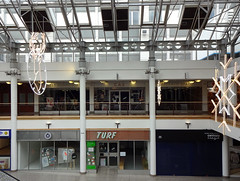 Art hub in the Whitgift Centre. It opened in September 2017.

The lower floor and basement are occupied by Turf Projects, who put on rotating exhibitions and hold regular workshops for adult artists as well as children. (Turf were previously on Keeley Road.)

The upper floor is occupied by Art Halo, a charity which holds art workshops, and Croydon Council's "research space", which is used to gather opinions from members of the public on cultural events in Croydon. Above this is the "loft", which is available for community events and exhibitions.

Accessibility: Step-free access to the two main floors only, via the Whitgift Centre lifts.