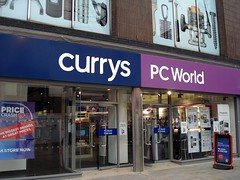 Electrical goods shop(s) with frontages on North End (pictured) and inside the Whitgift Centre photo. Although from the outside they appear to be two shops, internally there's no division.

As of late March 2014 the words "PC World" had been removed from the frontage photo, though the shop remained open. By August 2014 the sign had been reinstated photo.