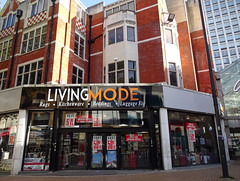 Luggage and homewares shop on North End. It opened some time between May and October 2019.

According to a photo on Flickr, as of 1989 the premises were occupied by a business called Hornes. According to another, Hornes was still there in December 1990 (most easily visible at original size).

As of January 2012 it was a branch of JJB Sports photo, but the entire JJB Sports chain went into administration in October 2012. Several JJB Sports branches were purchased by Sports Direct, but the Croydon store was not one of them photo of notice.

This marked the return of HMV to Croydon after the March 2013 closure of its Centrale store. However, as of January 2019 there were signs in the windows advertising a closing-down sale photo, and their Twitter account announced that their last day of trading would be 24 January. It was definitely closed by March 2019 photo.