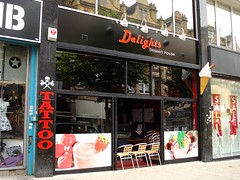 It was previously a dessert parlour called Delights Dessert House, but this closed down in 2017 or 2018.

The property was vacant but under offer as of July 2012 photo. As of mid-October 2012 it was marked as being let on the estate agents' website, and a "FIREWORKS" sign had appeared on the frontage; as of early November it had opened and was selling fireworks photo. The fireworks shop was only ever intended to be a temporary one, and closed after Diwali. A similarly-temporary Christmas shop was in place during November and December 2012 photo, though this closed again after Christmas photo.

As of mid-February 2013 it was vacant but with new doors photo and a new chill cabinet photo. As of March 2013 there were signs in the window stating that a dessert parlour called D'lights would be opening there soon photo. As of June 2013 D'lights still wasn't open, but more signs had appeared advertising vacancies for a manager photo and other staff photo.