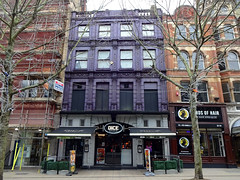 Bar and club on the High Street. It opened in May or June 2013 on premises previously occupied by Bar Sport and Twilight Lounge.

According to a bas-relief at the top of the frontage, the building was constructed in 1895.

A cocktail bar called Twilight Lounge photo opened in the basement of the building in late 2012, but closed again before Dice opened, possibly at the same time as Bar Sport. We aren't sure if there was a connection between Bar Sport and Twilight Lounge.

After Dice opened, for a while there was also a fully-licensed Italian restaurant called Authentic Italian Cuisine in the basement photo, serving a buffet during the day and a la carte in the evening. However, according to a staff member at Dice as of March 2015, this had closed down and wasn't coming back.

As of June 2015, the Croydon Advertiser reported that Dice Bar had been closed by the police; however, the owners assured us (via email, July 2015) that this only lasted for 24 hours and that Dice was now open again (we verified this ourselves a couple of weeks later).