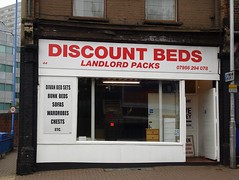 According to the frontage as of May 2013, they don't just sell beds, but also other furniture such as sofas and wardrobes.

According to a photo on Flickr, as of c. 1985 the premises were occupied by a shop called Pet Centre.