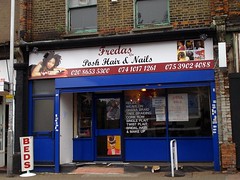 Before mid-2013 it was called Freda's Hair & Beauty photo.

According to a photo on Flickr, as of c. 1985 the premises were occupied by a record shop called Mr Price, while 1992 saw the opening of another record shop called Swag Records photo.
Existence last checked in December 2019.
Station Road