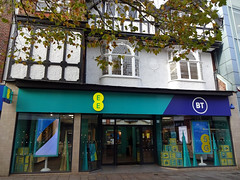 Mobile phone shop on North End. It moved from number 85 next door in May 2016.

According to London Footprints, this building was once the Rising Sun pub. A rising sun bas-relief photo is still visible between leaded bay windows photo on the first floor.

According to a photo on Flickr, as of c. 1988 the premises were occupied by a branch of Wimpy.

By December 2011 it was Burger King photo, but this closed in early 2014, with the premises completely stripped out by late March of that year photo and notices in the window photo directing people to the nearby branch at 41 Church Street.