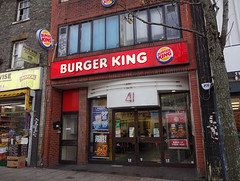 Fast food burger place on Church Street. Not sure if it's eat-in as well as takeaway.

According to a photo on Flickr (most easily visible at original size), as of c. 1985 the premises were occupied by a shop called Spencer's; see also a photo of Spencer's in December 1990.
Existence last checked in December 2019.
Church Street ...