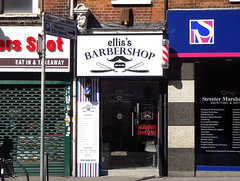 Barbers on the High Street.

It was previously a tiny sandwich shop called Petit Cafe photo (despite the "café" part of the name, the only seating appeared to be a single tall stool). This closed down some time between October 2017 and February 2018.

As of February 2018 it was being fitted out for a new business called R & J Barbers, and this was open by mid-June photo. Some time between then and May 2019 it became Ellis's Barbershop photo.