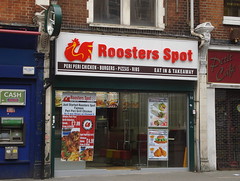 Chicken/burger/pizza/ribs takeaway on the High Street. It also has some eat-in space. It opened in late May or early June 2014.

It was previously a halal chicken-based takeaway called Peri Peri Original Chicken photo, but this closed some time in April or May 2014. The premises were vacant as of late May 2014 photo, but with signage indicating that it would open soon under the name of Roosters Spot.