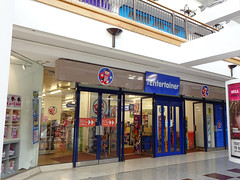 Toy shop in the Whitgift Centre. It opened in November 2017.

It was previously occupied by a branch of BHS photo, but as of July 2016, the whole of BHS had gone into administration, and this branch was due to close at some point, though the staff hadn't yet been told when. On 18 August we walked past and noticed that there were signs saying only 7 days left. It was definitely closed by late September 2016.

The unit was still vacant as of April 2017 photo.