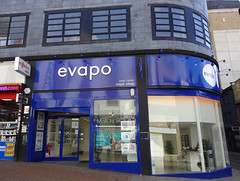 Vape shop at the Crown Hill end of Church Street. It opened in January 2018. The company used to have another branch at Unit 158 in the Whitgift Centre, but that has since closed.

A hairdressers called Marco Aldany photo some time in August or September 2012, and rebranded to Millimetre (Mm) in October 2014 photo. This then closed down some time between March and October 2017 photo of notice.