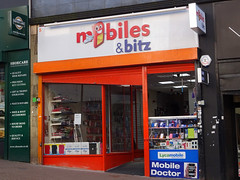 According to a photo on Flickr, as of December 1990 the premises were occupied by a Lunn Poly holiday shop.

By November 2010, it was a soft furnishings shop called "Cotton County" — this is the trading name given in the November 2010 Croydon Council licensing committee report (PDF). As of mid-July 2012 there was no name on the frontage photo. The new frontage, with the name "Home N Fashion" photo, appeared some time around the end of July/start of August 2012. However, this closed in early 2014, and as of April 2014 the premises were vacant.

By late July 2014 a convenience store called Croydon Express photo had opened, and by December 2014 it was also selling Caribbean and African groceries photo of A-board.

In July or August 2015 this became a beauty supplies shop called Croydon Hair & Beauty photo, possibly run by the same people. This closed down some time between August 2015 and February 2016.

By February 2016 it was a mobile phone accessories and repair shop called Mobiles & Bitz photo.