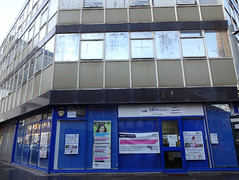 Education and training centre near East Croydon Station and opposite Croydon College.

It was previously located at 21-23 St George's Walk, but was forced to move from there in August/September 2018 due to redevelopment of the entire block. A notice photo stated that it was moving to Office 112, Lansdowne Building, 2 Lansdowne Road, but by December 2019 it was in Suffolk House.

Although Suffolk House is on George Street, these premises are round the back and hence the entrance is actually on College Road.

It was previously occupied by a printing and copying shop called letscopyit.com photo, but by June 2013 this had departed and the property was stripped out and vacant.