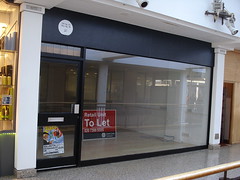 It was previously occupied by a skills training centre run by the Exchange Group photo, but this moved out some time between September 2013 and July 2014.