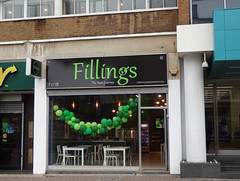 Cafe and sandwich shop on Wellesley Road. It opened in October 2019.

However, as of late September 2015 it was open again, still with the same signage, but under different management, selling newspapers, magazines, drinks, crisps, and confectionery photo. It closed down again some time between July and September 2019. The unit was vacant and partly stripped out as of September 2019.

In April 2019 Croydon Council had granted prior approval for conversion from a shop to a cafe/restaurant (ref 19/01061/GPDO). A cafe/sandwich shop called Fillings opened in October 2019.