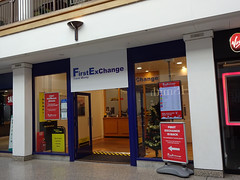 Currency exchange on the lower level of the Whitgift Centre.

The unit was vacant as of July 2012 photo. A clothes shop called Notting Hill photo opened in the latter half of 2012, but had closed again by May 2013 photo of vacant unit in June 2013.

It then remained vacant until a clothes shop called Anna photo opened in September or October 2013. This possibly had a couple of periods of closure and/or changes of management, but finally closed down for good some time between May and September 2016.

Some time between September and November 2016, a gift shop called Menkind opened up in the space, specialising in "original gifts for men". (This had previously had a presence elsewhere in the centre, in Units 31-32.) However, it closed down again some time between November 2016 and April 2017 photo.

At some point after that, it became another clothes shop called Dress Code, but this closed down again by July 2018.

At some point between July 2018 and October 2019, something (possibly another clothes shop) called Limelight opened up and closed down again.

As of October 2019 it was being fitted out to open as a currency exchange called No 1 Currency photo. This was open by the end of the month.