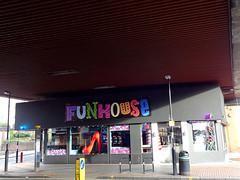 Bar on the High Street, under the flyover. It opened in late 2018.

It was previously an American restaurant called Buffalo Bar & Grill photo, but this closed in mid-2017 for "major refurbishment" photo of notice and relaunched in September 2017 as The Big Eat photo.

The Big Eat occupied only half of the full space of the building, whereas Buffalo occupied it all. The other half became Casafina tapas restaurant photo.

The Big Eat and Casafina both closed down some time between June and October 2018. The premises were then re-amalgamated to become a bar called Funhouse.