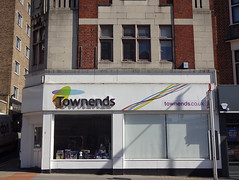 As of August 2019 there were beauty products inside photo 1, photo 2 suggesting that it had reopened or soon would reopen as a beauty shop, but there was no sign on the frontage. The situation remained the same as of mid-September, and the door was locked every time we walked past and tried it. According to staff at Crushed Bean across the street, the beauty shop was only open for a very brief period before giving up, but the tenants were keeping the stock inside even after its closure so it didn't look abandoned.